Traffic management specialist A Cones has become the first customer to benefit from a new strategic alliance which is transforming the sector’s vehicle supply market.

The Black Bourton, Oxfordshire-based operator has commissioned a fleet of 10, highly bespoke impact protection vehicles (IPVs) built by the Bevan Group and fitted with crash cushions and high-visibility light arrows by Highway Care.

The subject of a consultative design and build process in which the customer was heavily involved, the trucks are based on 18-tonne Mercedes-Benz Antos chassis and incorporate several features that will make the job as safe and comfortable as possible for A Cones’ operatives.

Winner in 2017 of the inaugural Commercial Motor Bodybuilder of the Year award, the multi-faceted Bevan Group operates from headquarters in Wednesbury, West Midlands, and is a valued supplier to some of the biggest names on UK roads. Highway Care, meanwhile, has a Head Office in Detling, Kent, and has pioneered the development of crash cushion technology and other mobile traffic products for use on motorways and trunk roads. 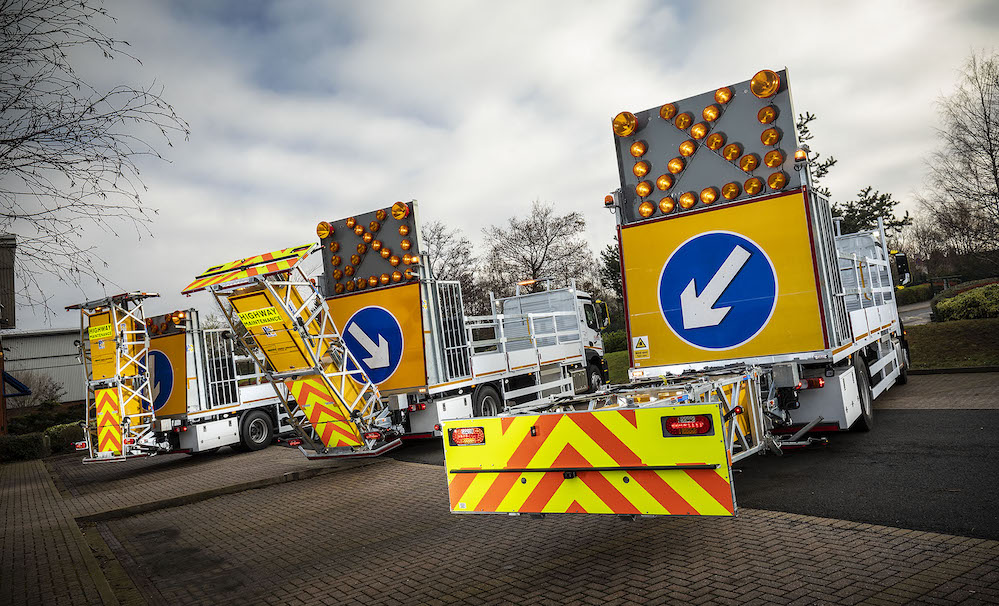 So successful was this initiative that the partners then developed a ‘one-stop shop’ impact protection vehicle design and build solution, to include the application of liveries by Bevan’s Graphics team. A Cones’ trucks are the first to be completed, but a further 60 – representing a substantial proportion of the total requirement for the sector – will be built over the next couple of years, and the order books continue to swell.

crash cushions, which absorb rear-end impacts at speeds of up to 68 mph (110 kph compliant to TD49/07), and can be deployed at a travelling speed of up to 55 mph. Potentially reusable, the Safe Stop 90

boasts a galvanised external safety frame that offers protection against the low-speed ‘nuisance’ impacts – incurred, for example, when a vehicle is manoeuvring in a yard – which are a common cause of damage to crash cushions.

Reflecting the substantial investment made by A Cones, Bevan’s bodies are engineered to an exceptionally high standard – the manufacturer typically commits to an eight-year product life, but a decade and more after they left its factory many of the dropsiders it has supplied to one of the country’s best-known builders’ merchants continue to look good and perform well for their second and even third owners.

Innovative features of the company’s design for A Cones’ IPVs include dropsides, sideguards and hand rails which, rather than being hinged so they open into the carriageway, slide out of the way to permit access; hinged yellow cone well ‘lids’ and other trip hazard prevention measures; and cone wells which are approximately 20% larger than might be seen on a typical ‘off-the-shelf’ 18-tonne IPV, giving operatives more room to move around during deployments and collections. The trucks are also equipped with beacon bars and front- and rear-facing 4G recordable, downloadable and streaming camera systems.

Established in 2009 by Steve Pope and his father Terry, the Managing Director, A Cones runs a fleet of 16 IPVs, all 18-tonners, as well as 30 vans, and is a fully compliant, second-tier supplier to major contractors such as Egis, Balfour Beatty and Tarmac. Its comprehensive portfolio of traffic management services includes 12A/B static works on motorways and dual carriageways, and 12D street works, but the firm specialises in 12C mobile lane closures on high-speed routes.

Explaining the rationale behind A Cones’ biggest single fleet acquisition to date, Steve Pope says: “We work for some very prestigious clients and wanted our new trucks to stand out from the rest, and to be a source of pride for the staff who work on and look after them.

“We chose Mercedes-Benz chassis for the brand’s premium values, as well as its reputation for reliability and safety. And we chose Bevan and Highway Care to build and fit out the trucks, because we were attracted to the idea of being the first customer for their new partnership. The ‘one-stop shop’ proposition also made good sense; we haven’t had the hassle this time, for example, of taking the trucks elsewhere to get them liveried, as we’ve had to do in the past.”

Mr Pope continues: “Bevan and Highway Care weren’t the cheapest, but we all got on really well from the outset. The impressive set-up at the bodybuilder’s production facility gave me complete confidence that rather than building a standard IPV, they would be able to produce a vehicle which was perfectly tailored to meet the needs of our operation.

“I attended a series of production meetings, and am sure I frustrated them at times with some of my requests. One of the advantages of working with a new supplier to the sector, though, is that rather than being stuck in their ways, they’re open to fresh ideas. Certainly, they took everything on board, and have delivered on all of their promises.

“We’re delighted with the result, because our new IPVs look fantastic and are clearly built to last. Given this, they can only enhance our growing reputation as a quality service provider within the traffic and highways management industry.”

A Cones ran a competition among its 60-strong workforce and their families, and on social media, inviting name suggestions for each of its new trucks. The winners – including the wag who came up with ‘The Cone Ranger’ – will each receive a gift voucher as their prize.

Phil Jeeves, Highway Care’s Commercial Manager – Mobile Traffic Products (MTP), comments: “Our company’s ethos is all about innovation, competence and compliance, and it was evident from our first discussions with Bevan Group that as a privately-owned concern they have the same approach and commitment to quality. I was very keen, therefore, to develop the relationship with Bevan, and we’ve already established a very encouraging order pipeline.”

Bevan Group Sales Director Roy Shelton adds: “Other ‘players’ in the traffic management sector will build vehicles to a price point. But our success in disrupting the market so quickly, and to such an extent, demonstrates that there’s a genuine appetite among operators for high-quality, bespoke equipment, which can still be surprisingly attractive in terms of acquisition and running costs.”