RRS, a Portsmouth, UK-based lifting, transport, and storage specialist, expanded its fleet of Hydra-Slide products to fulfill a scope of work for CTS S.p.A, which was tasked with installation at the disused quarry site at Westmount Gardens. 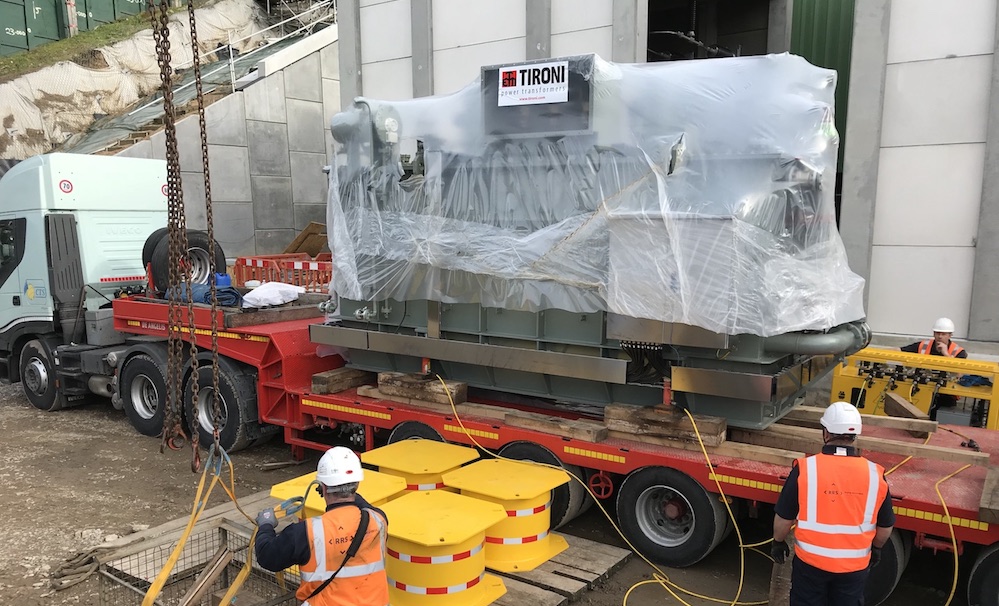 RRS equipment was utilised upon arrival of the approx. 6m by 2.6m by 3m transformers from Italy. The first challenge of note was turning the units on the CTS vehicle, before they could be slid into an existing opening in the side of the new building and then across to foundation slabs. Prior to that, however, RRS utilised a loader crane mounted to the vehicle upon which the equipment travelled to lift the pieces of the turning and skidding jigsaw into place. The Fassi F365—a 36t/m crane—offered the team 2.5t of lifting capacity at a 12m radius. It also eliminated the need for an additional lifting machine. 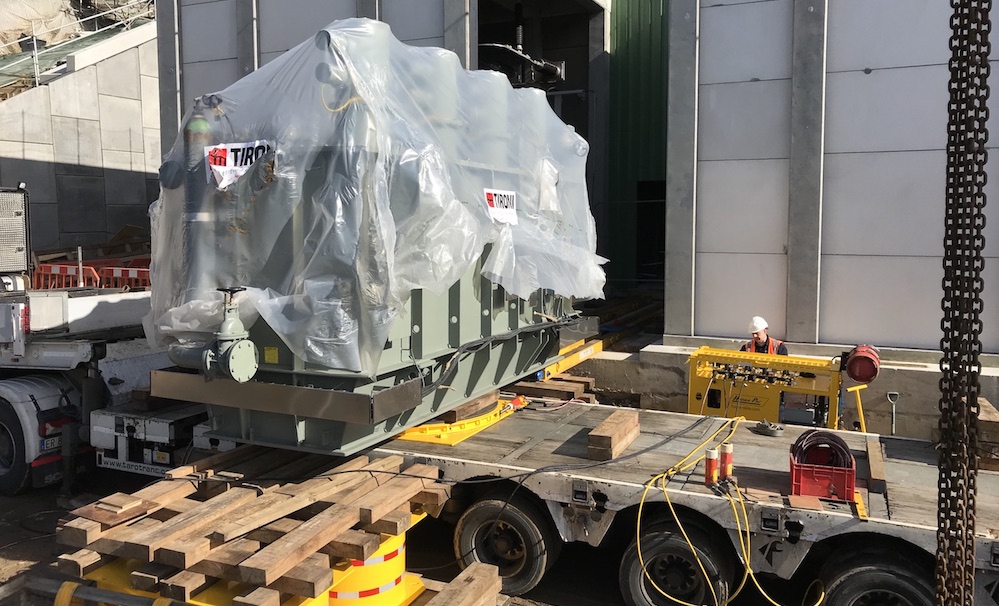 Paul Barber, managing director at RRS, who was one of three riggers who travelled in addition to the lorry driver, said: “We unloaded our equipment before the first transformer arrived onsite around 8pm on the Monday. The following morning we jacked up the transformer on the trailer to put the turntable underneath, with which we turned the transformer 90 degrees [the opening in the building was too small to put the units inside then turn them]. We then jacked up the transformer, removed the turntable and replaced it with the HT300, before sliding it off the trailer and through the doorway.”

There was only approx. 100mm of clearance on each side of the transformers, manufactured by Italy’s Tironi, at times during the first 12m slide. Once in the building, the units were jacked up off the HT300 and placed onto the LP350 for the final 9m slide onto the foundation slabs. Once on the slabs, the LP350 was removed and the alignment shoes employed for final positioning.

Barber recalled that the first lorry was escorted from the site at 2pm on the Tuesday, while the second truck was escorted in at 8pm that night. The second transformer was unloaded in the same manner on the Wednesday; Thursday was used to load the skidding and other equipment back onto the transport. However, RRS’s work wasn’t done; the following day, the ancillary equipment turned up on sliding roof trailers that was unloaded as part of a contract lift using a 40t crane from a local rental firm.

Barber added: “We did look at a crane to unload the transformers as well but the largest one on the island was 80t capacity and that wasn’t big enough so we would have had to ship it from Portsmouth. Further, because of the vehicle restrictions on Jersey, the ballast, fly jib, and accessories would have had to travel on separate lorries. By using the skidding equipment we saved around £20k.”

Mark Vivian, senior projects engineer at Jersey Electricity plc, said: “The operation was efficient, with completion in three days on a compact site. We have seen hydraulic systems before but this one was more compact, easier to handle, and required less manpower.”

The synchronous power unit powered four 100t WLL cylinder jacks, the turntable, both skidding systems, and the alignment shoes. Beneath the (yellow, cylinder-like) support stands, 3m by 1.5m by 100mm timber mats were laid on sand to level out the uneven ground.