Companies in the UK are increasing their stock as a means of preparing for a hard Brexit.

Fears that the UK will leave the EU without a deal have caused an explosion in the number of goods ordered for delivery to the British Isles. Compared to the the previous year, truck transports from all parts of Europe towards Great Britain have more than doubled in the first quarter of 2019, with growth of 112%. These are the current numbers on the TIMOCOM transport barometer, which the IT company uses every quarter to document the development of transport offers and requests on Europe’s largest freight and vehicle application.

“Companies in the UK that depend on imports from the European mainland are increasing their stock, in order to be prepared in the event of a hard Brexit,” says TIMOCOM Business Analyst David Moog regarding the quarterly results. According to the data analyst, a no-deal Brexit could mean that vehicles wanting to enter the UK will face extremely long waiting times. “In turn, this could cause supply bottle-necks. Customs fees on the goods are another uncertain factor,” says Moog, noting that the biggest growth in exports to the UK has been from Germany, France and Poland.

The supply and demand developments on the German market and on the European mainland are completely different. “The reserved economic situation has finally reached the transport economy,” says TIMOCOM Company Spokesman Gunnar Gburek about the quarterly results.

The number of companies searching TIMOCOM for transport options for their industry and trade goods decreased in the first quarter of 2019. On average, from January to March 2019, there were 52 freight offers for every 48 vehicle offers. The freight to vehicle ratio for the first quarter of last year was 54:46.

Higher tolls, which were introduced for trucks in Germany at the beginning of the year, have also had an effect on supply and demand within the transport market. In the first three months of this year, TIMOCOM documented a decline in vehicle offers of 12% as compared to the first quarter of 2018. “High toll rates, among other things, mean that European companies not based in Germany have less reason to offer transport within Germany,” is Gburek’s interpretation of the current development.

The transport barometer is an instrument used by the IT company to analyse, per quarter, trends in transport offers and demand as found on the freight exchange, part of the TIMOCOM Smart Logistics System. TIMOCOM, with more than 130,000 users and up to 750,000 international freight and vehicle offers daily, is the largest system platform for road transportation of goods in Europe. 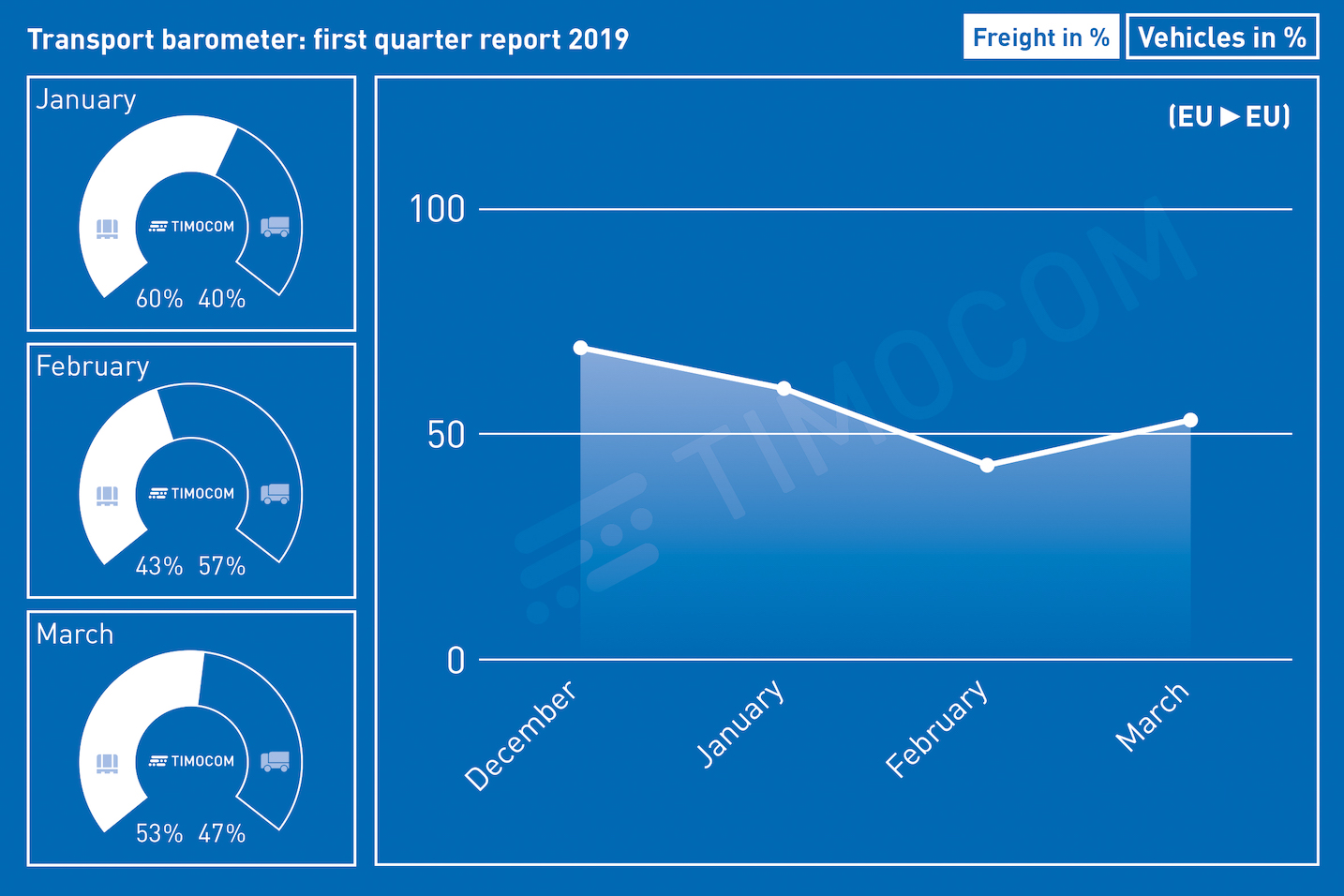