With the new gas-powered engine, the challenge for Volvo Trucks engineers was to develop a new driveline that could reduce CO2 emissions immediately, offer customers the same high performance as diesel and be a viable solution for the future. The final solution meant re-thinking the whole usage of the diesel principle.

Growing concern over global warming is increasing pressure to move away from fossil fuels. In many of the world’s cities, leading city municipalities are looking to ban diesel cars, in some cases within only a few years.

The question is: what will be the alternative? Which fuel source can reduce CO2 emissions, deliver the required power and performance and still be a commercially viable option for the average transportation company? Volvo Trucks believes that the answer – at least partly – is gas. 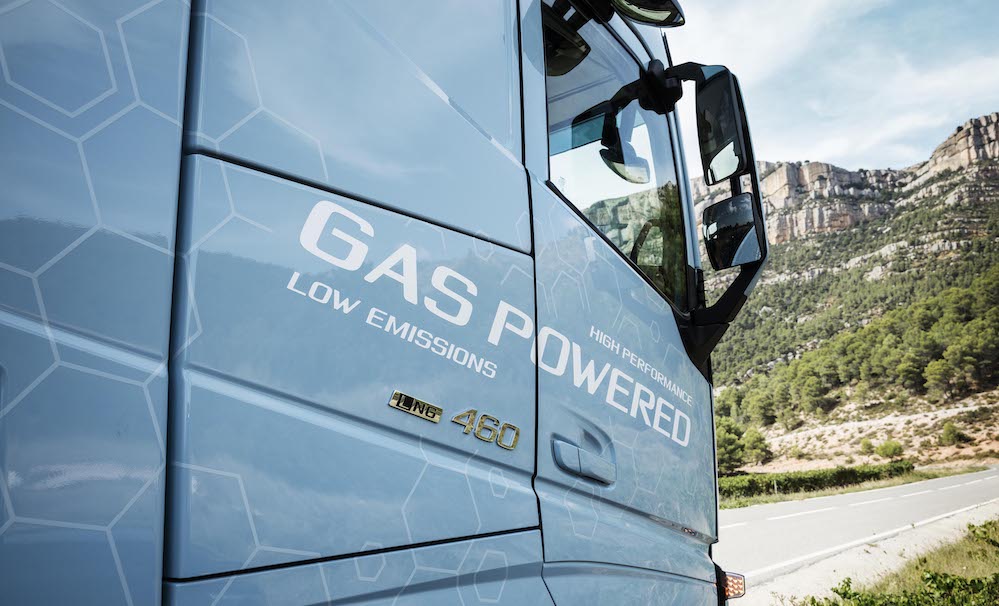 The Volvo FH LNG and Volvo FM LNG are the first gas-powered heavy-duty trucks on the market that can offer enough power to meet the needs of heavy regional and long haul operations. Both models, which are available with 420 hp and 460 hp, offer the same performance and driveability as their diesel equivalent and can drive up to 1000km before refuelling.

In fact, the only difference is the fuel – liquefied natural gas (LNG) – which cuts both fuel costs and CO2 emissions significantly. When powered by natural gas – which in the short-term is a more viable option for most transport operators – CO2 is reduced by 20 per cent compared to diesel. For a truck covering 120,000 km per year in heavy transport, this translates to a saving of 18-20 tonnes of CO2 a year. But the greatest potential for savings is when the vehicle is powered by biogas, in which case tank-to-wheel CO2 emissions are reduced by 100 per cent. Furthermore, while fuel consumption is on par with Volvo Trucks’ diesel engines, it is 15 to 25 per cent less than conventional gas engines.

“LNG is promising as an alternative to diesel since it offers a good combination of both environmental and business benefits,” says Lars Mårtensson, Director Environment and Innovation, Volvo Trucks. “Natural gas is in high abundance globally, and the infrastructure network for LNG is expanding.”

LNG is by no means a new fuel. However Volvo Trucks is the first to use it to deliver this level of horsepower in a heavy-duty gas truck. This has been made possible by using the Diesel principle instead of the Otto technology, which is most common for gas engines. The key difference is that Otto engines use a spark igniter, which brings with it limitations in power, torque and reliability, and is more sensitive to knock. Engines with diesel principle can achieve higher horsepower and torque by using direct injection and relying on heated compression for ignition.

“Until now the challenge has been that gas cannot be ignited by compression alone – you need something to start the gas burn process. Compression ignited diesel pilot is what ignites the gas in the engine,” explains Anneli Soppi, Chief Project Manager at Volvo Group Trucks Technology. “But that raises the challenge of how to inject two different fuels into the cylinder, since it is very difficult to have two injectors.” 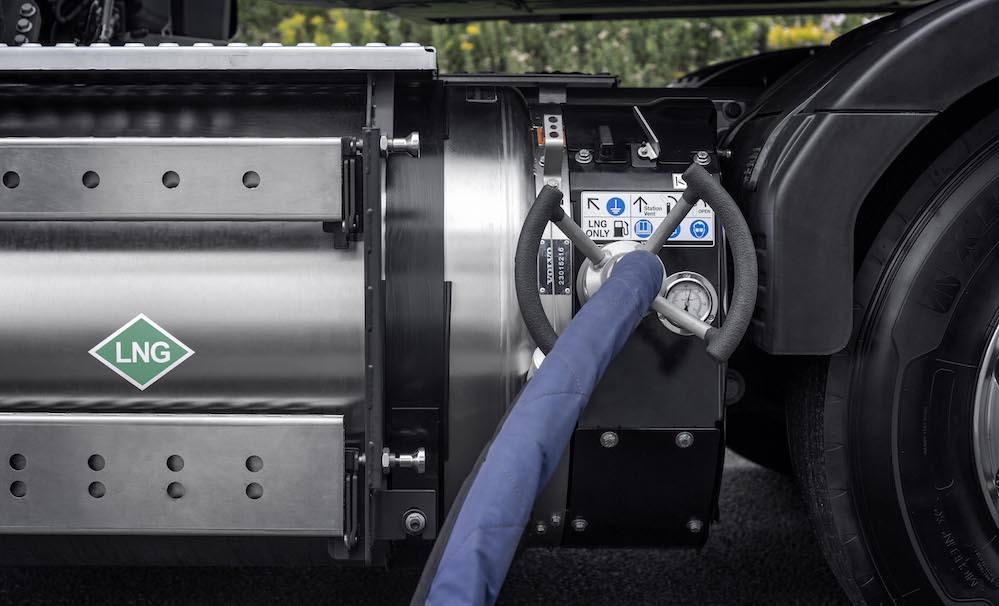 The answer came in the form of two concentric needles that can inject both diesel and gas directly. Using this unique technology, a small amount of diesel is injected into the cylinder prior to the gas, to initiate the ignition.

“The diesel is essentially like a liquid spark plug,” says Anneli Soppi. “The engine runs predominately on gas – in fact it substitutes over 90 per cent of the diesel used in a conventional diesel engine, yet we still get all the advantages of a diesel engine, including the same high power and torque.”

So does this mean that natural gas is the future of transport? The popular perception is that it will be electricity, and while that might be true for passenger cars, the development of electromobility technology is still a long way from providing a commercially viable heavy-duty truck for long haul applications.

“The winning fuels will be the ones that can offer good energy efficiency and low climate impact,” says Lars Mårtensson, Director Environment and Innovation, Volvo Trucks. “We will see a number of alternative fuels being developed including electricity, and different fuels will be used in different applications. Diesel will still be widely used for many years to come as we make that transition. However when it comes to heavy regional and long haul, LNG is clearly best positioned today to quickly become a globally available alternative to diesel.”

In the long-term – because of the possibility of using biogas instead of natural gas – LNG offers the potential to reduce emissions even further. “Any future transition to a biofuel will be done gradually, so the most successful biofuels will be those that can be supported by a fossil version of that fuel during that transition,” adds Lars Mårtensson. “For example, natural gas ensures security of supply for any vehicle powered by biogas. As the production and distribution of biogas improves and the costs come down, the possibility of operating on biogas will increase accordingly. In short, you will be able to reduce CO2 significantly simply by switching fuel source.” 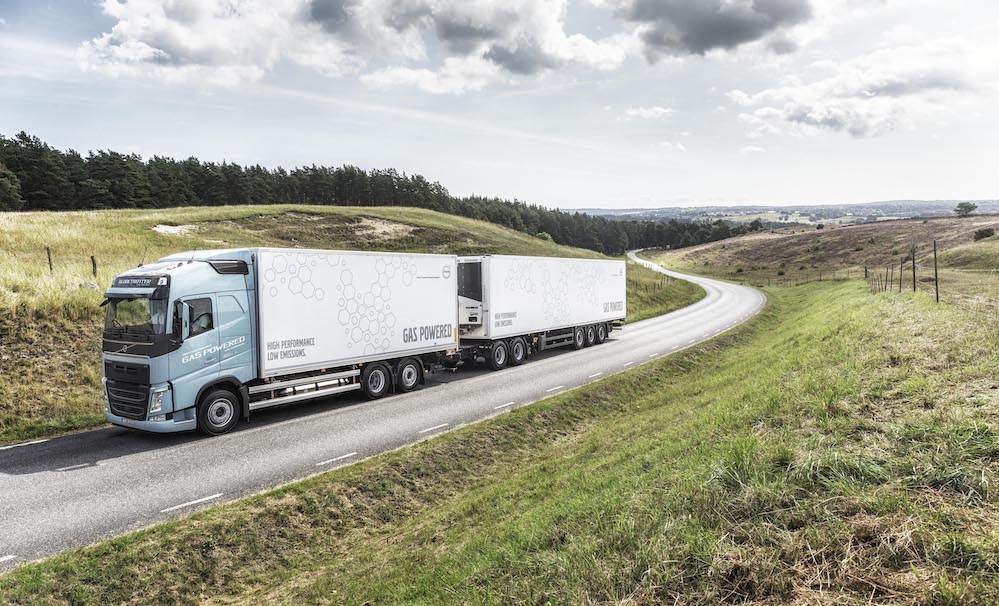 Today, the biggest hurdle for using LNG – either natural gas or biogas – is the lack of infrastructure for distribution and refuelling. However, with climate change becoming more in focus, many national governments are supporting investments in LNG infrastructure. This means gas suppliers can now see huge commercial potential in supplying the transport industry.

“We believe natural gas offers the greatest potential, both for making immediate CO2 reductions and being a long-term solution for the next 20-30 years at least,” says Lars Mårtensson. “The lack of infrastructure is a challenge but it is also a challenge that we are not alone in facing. For example, the EU recognises this and has set aside funding and programmes. And developing trucks like the Volvo FH LNG and Volvo FM LNG will also help speed up LNG production so the potential is huge.

Accordingly, the Volvo FH LNG and Volvo FM LNG have been developed with the longterm in mind, involving Volvo Trucks’ engineers from several sites around the world. “Diesel engines are familiar territory for Volvo Trucks, having developed and improved them for some 70 plus years. But with the LNG driveline we are breaking new ground and that inevitably takes time due to the need to build up internal knowledge and expertise,” say Mats Franzén, Product Manager Engines, Volvo Trucks.

For this project, one of the unique challenges working with high–pressure gas is to secure that the system is tightly sealed; so countless hours have been put into making sure all seals are impenetrable and they have been vigorously tested to ensure their long-term durability.

Overall, the new vehicles have been subjected to the same testing and validation that Volvo Trucks applies to all its engines and vehicles, including crash and durability tests and extensive field tests, in both hot and cold climates, and at high altitude.

“It’s been an extensive process, but as a result these are going to be very high-performing trucks,” says Mats Franzén. “When driving them you will not be able to tell if you are driving a diesel truck or a gas truck. They combine fuel cost savings with CO2 saving and diesel-like durability!”